Andrew Cuomo, the Governor of New York has included the legalization of marijuana in his budget proposal. This move has set a stage for reform with the 2020 session underway.

This comes after it was highlighted in a poll that the voter support is at its highest to end the prohibition of cannabis. The governor did try to include a similar plan in his budget the previous year. However, he dropped it in the end as lawmakers could not come to a conclusion.

During his speech, Cuomo said that the budget session is more like an opportunity to take a stand on tough issues. This year, he has proposed a comprehensive regulatory approach for legalizing the use of cannabis.

He is insisting on creating the Office of Cannabis Management which will look after cannabis regulation affairs. The department would be responsible for overseeing hemp programs, adult and medical use of cannabis.

The proposal focuses on developing a market structure and to facilitate market entry by incubating equity entrepreneurs, technical assistance, and by providing access to capital.

The proposal is also aimed towards correcting the harm caused to communities and individuals previously who were impacted by the prohibition of cannabis. To keep public health at the forefront, the proposal has restricted the sale of cannabis products to adults under 21.

Stringent measures would be taken to ensure the safety of individuals. The regulations would be brought into force by taking assistance from neighboring states Pennsylvania, New Jersey, and Connecticut.

The Governor has also proposed the creation of a Global Cannabis and Hemp Center for Science, Research and Education with several expert partners. 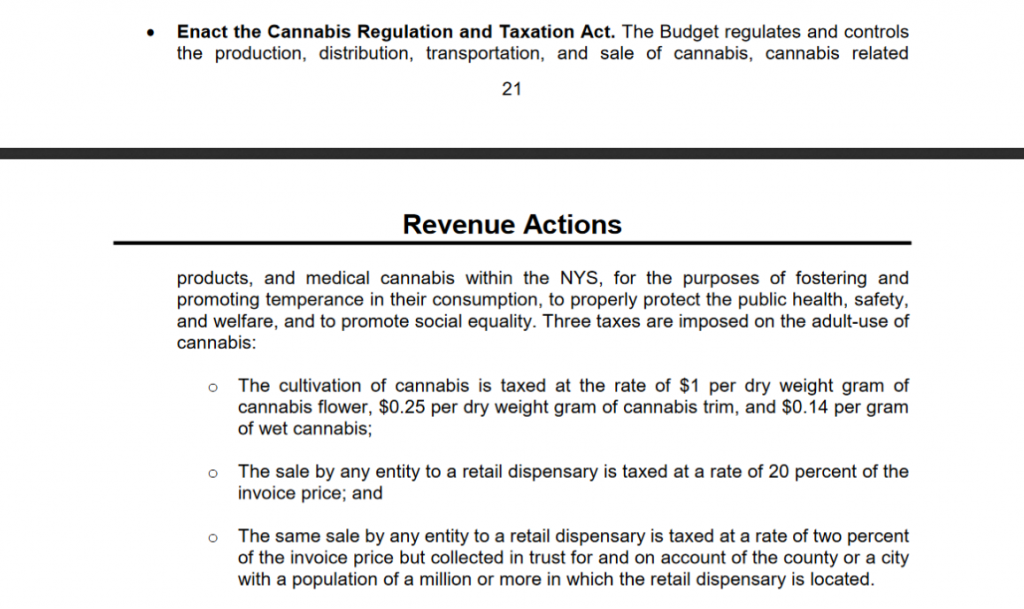 Currently, three levels of taxes have been mentioned in the proposal. A 20 percent tax would be levied on cannabis sold to the retailer by an entity. The cultivators will be required to pay $1 per gram of dry cannabis flower. $0.14 per gram would be the tax for wet cannabis and $0.25 for cannabis trim per gram.

The proposal further states that the budget would also regulate and control the production, transportation, distribution, and sale of cannabis as well as the derived products. This would be done solely for the sake of protecting public health and overall welfare.

Cannabis reform is a major issue that has been concerning Governor Cuomo for long. He embraced the thought of legalizing the use of cannabis only towards the end of 2018.

He earlier called marijuana as a gateway drug. He then invested a lot of time to negotiate with the lawmakers about the specifics of the legalization bill. He has strived hard to create a plan for coordinating regulations surrounding the use of cannabis.

Although no law was passed the previous year pertaining to the legalization of cannabis, governor Cuomo did sign legislation that focused on expanding the decriminalization policy.

Earlier this month, he reiterated his commitment to legalize the use of marijuana. He, however, stressed more on the economic benefits. His proposal currently aims at building a three-tier market structure. This is similar to the way alcohol is distributed currently.

Marijuana business applicants would be provided loans, training, technical assistance as well as mentoring provided they qualify under the economic and social criteria. The tax revenue would be diverted towards safety efforts, implementation costs and towards other social and economic plans.

Cities and counties having a population over 100,000 or more will be able to opt-out of permitting cannabis businesses from their jurisdictions. The proposal also covers the home cultivation of medical cannabis.

Cultivation at home will be allowed but would be limited to four plants per household. Recreational consumers would not be able to grow marijuana in their homes.

New York is one of the many states where a massive cannabis reform is expected to take place this year. The Governor of Rhode Island has already included a cannabis model in her budget plan.

Lawmakers in New Hampshire are planning to follow non-commercial legalization. The same is the case with New Jersey. Major reforms can be expected all over the US pertaining to marijuana legalization.