Shocking: This NFL Player was Arrested for Possessing 157 Pounds of Marijuana

A former Cleveland NFL player has gotten into legal trouble when he was found by authorities possessing large amounts of marijuana illegally.

Greg Robinson, the former NFL player has been arrested while driving from Los Angeles to Louisiana. The authorities were alerted by a drug-sniffing dog. He is going to spend significant time in prison for holding an astounding amount of marijuana. 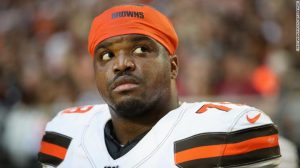 The offensive lineman who represented Cleveland Browns the previous years was sent to a Texas jail after being booked by the Drug Enforcement Administration.

He was stopped at a checkpoint near the El Paso-Mexico border. The vehicle was carrying two other individuals along with the drug and the player.

As per a few reports, Robinson and the fellow passengers had the intention of selling the drugs. They were driving a rented sports utility vehicle from Los Angeles through a remote section of West Texas.

As soon as they passed the Border Patrol agent, a drug-sniffing canine sensed the scent of marijuana. The agent then informed the officer at the next checkpoint near Sierra Blanca.

“Agents upon inspection found duffel bags consisting of vacuum-sealed black bags. These were tested and found to be positive as marijuana. They even had $3,100 in cash and packaging equipment along with them.”

Photo via U.S. Customs and Border Protection from the Greg Robinson bust, showing the duffle bags holding 157 pounds of marijuana found in the back of the rented Chevy Tahoe pic.twitter.com/xMTI00ojkt

The third person along with them was identified as an Uber Driver who ran errands for Robinson and his friends.

Related: This 80-Year Old Man was Arrested for Growing Cannabis to Treat His Medical Condition

He pleaded innocence and showed his texts to the police officers that he had been offered pay for claiming the ownership of marijuana.

He showed that he clearly refused. He also mentioned that he would not have made the trip with the player had he known that he was carrying drugs in the vehicle. Hence, the individual was not imposed any charges.

The United States Customs and Border Protection have also released a photo from the bust. The back of the player’s Chevy Tahoe carrying the duffel bags in which the drugs were stored has been shared by the officers.

The 27-year old star is set to become an unrestricted free agent after spending two seasons with Cleveland Browns. As per Tom Pelissero, the Cleveland Browns have no intention of signing Robinson this season.

He previously entered the league as No. 2 overall pick. He was a highly-touted prospect when he came into NFL. The Rams traded him in 2017 to the Detroit Lions. Injuries derailed him while he was with the Lions and later he ended up with Cleveland Browns.

He starred in 22 of 31 games played by the Browns. However, his offensive tackle wasn’t dominant as it had been anticipated by many when he stepped into the NFL.

Poor performance and his arrest wouldn’t do him any favor of landing a gig at the NFL. His alleged partner in crime, Bray bounced around with three different teams before landing a short stint in the Canadian Football League and in the Alliance of American Football.

Marijuana and the NFL

Robinson may have to struggle to land a job in the next season in case he manages to escape his jail time.

A source informed ESPN that he would not be re-signed by the Cleveland Browns this season. This makes him a free agent. There is also a penalty awaiting him from the NFL.

Although several professional sports leagues are still considering revising their marijuana policies, the NFL has imposed a strict ban on the drug.