Bernie Sanders’ Team Encouraging the Legalization of Marijuana in 2021

The latest campaign by Senator Bernie Sanders is all about legalizing marijuana without having to wait for Congress to make a move.

The Senator is guiding the Justice Department to reclassify cannabis under the federal law. The Washington Post reported that legalizing marijuana is one of the executive actions considered by Bernie for his first days as the president.

“An internal campaign document obtained from Bernie’s office makes it quite clear that legalizing marijuana is one of the early executive actions that Bernie would take if voted to power.”

The report further states that, “We cannot accept delays from Congress on some of the most pressing issues, especially those like immigration where Trump has governed with racism and for his own corrupt benefit.”

Other proposals being studied by Senator Sanders team includes offering approval to the US agencies for importing prescription drugs from Canada. The proposal also lays special focus on treating climate change as a national disaster.

The proposal for Bernie Sanders campaign was drafted by the top three aides: Josh Orton, the policy director, Warren Gunnels, the senior advisor and Faiz Shakir, the campaign manager. However, it is being claimed that Sanders is yet to formally sign the campaign proposal.

Although most of the proposed executive orders have not been reported officially, Sanders has already committed publicly to end the prohibition of marijuana as a part of drug policy reforms.

The Democratic Presidential Candidate released a cannabis policy plan the previous year. He made it quite clear that he would send clear instructions to Drug Enforcement Administration, Health and Human Services Secretary and to his Attorney Journal for ending the drug war. 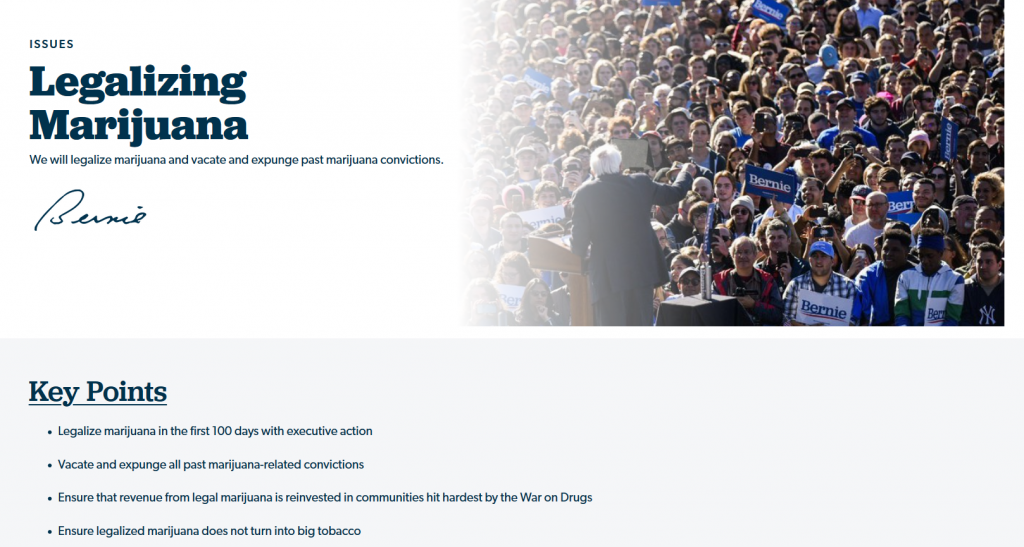 Sander has pledged to utilize executive action to deschedule cannabis federally within 100 days after Attorney General is confirmed. He also mentioned that a swift action would be taken for those with cannabis convictions.

He intends to redirect tax collected from cannabis sales to providing support to communities affected by the drug war. He is also quite adamant about preventing tobacco companies from foraying into the marijuana business. Much focus would be given to small businesses for entering the market.

Bernie is one of the first major presidential candidates to endorse the legalization of marijuana. He had filed for descheduling marijuana way back in 2015. He has talked about the topic frequently throughout his campaign trail. The Senator has taken unique measures to tackle the issue. He has voiced his support at a leading cannabis company located in Illinois.

Sanders has always taken the lead in matters pertaining to cannabis reform movement. He has declined approving all comprehensive drug policy proposals in haste. He has mentioned it on various occasions that he is studying the issue thoroughly and wants to present a concrete proposal backed with substantial evidence.

Bernie Sanders is not the only person to speak in favor of legalizing cannabis. Both Rep. Tulsi Gabbard and the former Indiana Mayor Pete Buttigieg support regulating as well as legalizing marijuana.

Presidential candidates Tom Steyer and Andrew Yang have favored permitting legal use of opioids. Yang also backs the legalization of the use of psilocybin mushrooms for therapeutic purposes.