Eight years after the state of Washington legalized the recreational use and sale of cannabis, a bill was passed last week, on March 9, to implement a social equity program in the flourishing industry.

The bill needs to be signed by Democratic Governor Jay Inslee before a task force can be formed to overlook the execution of the program.

The House Bill 2870 is deemed to be beneficial for communities who have been disproportionately affected by the War on Drugs. The bill was approved by a 28-20 margin in the Senate and a 57-40 majority by the state House of Representatives.

If the law is sanctioned, then the Liquor and Cannabis Board (LCB) can go ahead and issue forfeited, canceled and revoked retail licenses to applicants in affected communities.

Rick Garza, the director of the LCB, appreciated the senate’s decision and said that this was a much-needed change to the existing regulations. “The history of cannabis prohibition shows abundant evidence there was disproportionate harm in communities of color, and that those harmful effects remain with us today,” said Garza.

Studies have shown that Black people were four times more likely to be jailed for marijuana possession than their white counterparts before it became legal in the state in 2012. At present, only 1% of recreational cannabis licenses are held by black and brown people.

The program will look at the person’s family and criminal history before granting a permit to operate. It will also see which neighborhood they plan to start their business in. 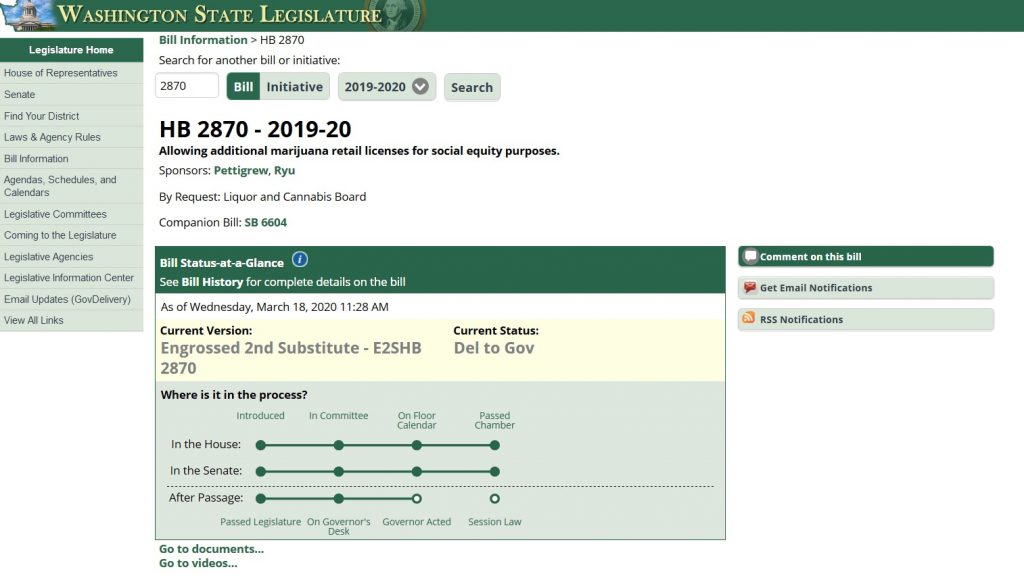 The bill was sponsored in the House by Democratic Rep. Eric Pettigrew, whose original draft proposed low-interest loans to minority owners of cannabis businesses. However, his draft also intended to allow out-of-state investment to flow into the industry.

This proposal was met with strong dissent by lawmakers and business owners on the grounds that it would lead to mostly wealthy white industrialists monopolizing the business, extinguishing the chances of small independent businesses to flourish.

Pettigrew admitted that he had lacked far-sightedness and said that he “really came to understand that this is beyond the issue of licenses.” “That was an awakening for me,” he further said.

Related: Coronavirus Alert: Cannabis Vape Supply Hit Due to Shut Down in China

In drafting the second version of the bill, HB 2870, he consulted Paula Sardinas of the Commission on African American Affairs who feared that the bill would be eventually amended and rendered fruitless.

She was opposed to a proposal that wanted to replace the social equity program with funding for research regarding the subject. She vehemently stated, “We don’t need any more studies.”

Even if the bill is turned into a law, the African American community is still skeptical of its usefulness at the ground level. A large number of them feel that the first change required is in the attitude and management of the LCB.

They say that the board has an unhealthy bias against minorities and that it acted more like an enforcement body rather than a regulatory one. Aaron Barfield of the Black Excellence in Cannabis group called the LCB’s attitude a “toxic culture” and called for its reform.

Many owners feel that the officers of LCB treat them like criminals despite the business being declared legal and were on the lookout for every opportunity to find them out-of-compliance.

“People are concerned that the LCB will hand them a license with the right hand and claw it back with the left,” Sardinas said and highlighted the need for the diversification of the industry.

Rick Garza said that the state had “missed an opportunity” to implement social equity in the industry when the legalisation first came about but this was a chance to rectify that error.

The task force that will be created, if the bill is approved, will have a representative from the labor organization.

While the Democrats welcomed this move in the interest of the workers, Republican Senator Maureen Walsh feared that it could lead to unionization of the industry.

The bill, as of today, awaits Governor Inslee’s signature and if approved, it is expected that the first licenses would be issued by December 1.